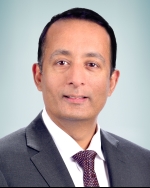 Mr. George holds a bachelor’s degree in Physical Therapy and earned his MBA in Healthcare Administration from Baker College of Business in MI. He completed his Executive Leadership Formation training for Healthcare Leadership from Aquinas Institution of Theology in St. Louis, MO. He is a member of the American College of Healthcare Executives and serves on various boards including the American Hospital Association’s Regional Policy Board.